Black Widow – Nat is back in the most brutal way 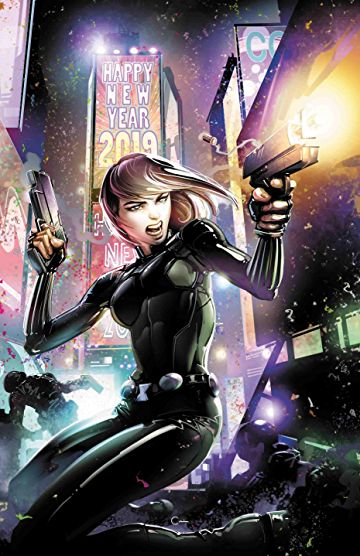 It wasn’t that long ago that we witnessed the death of the Black Widow, at the hands of the evil Captain America, in order to spare Miles Morales from killing the same man that would become her murderer. It was only a year and a half ago, which can seem like an eternity in comic book time, that we saw Nat’s neck snapped by Cap’s shield. It was a brutal scene and definitely not something I was prepared for. As bad as Evil Cap was I wasn’t expecting to see him snap the neck of his longtime friend and teammate. It was remembering this scene that led me to be even less prepared to see Black Widow and Captain America chumming it up in the first chapter of Black Widow #1, penned by Jen and Sylvia Soska with art by the incredible Flaviano. It was definitely a surprise. A pleasant surprise but still a surprise.

When you get your hands on this book you will definitely see that it is written in two very separate chapters. The first chapter, the story of Captain America, the real Captain America, and Black Widow coming together to take down yet another pretender to Cap’s mantle, feels like a classic Avengers team-up told by two true fans. If you had the opportunity to read the last couple of solo runs of the Black Widow, you’d be very familiar with how this so often goes. The Black Widow is tasked with some particularly brutal heavy hitting, she executes it with perfection, but at the last minute she is reminded that her methods are too extreme and “heroes don’t kill”. This time that really doesn’t matter. The Black Widow is no longer a part of the Avengers. She’s no longer a recognized hero. For now, the Black Widow is dead and, as she is perfectly happy reminding him, Captain America killed her.

It’s here that we start our second chapter. Nat is dead and no longer bound by the morals and guidelines of the Avengers. She is finally free to be herself, to fight her way, and to exact her preferred type of retribution. It only takes a couple of pages for the Soska Sisters to find Nat engaged in bloody and efficient ass kicking. Nat has found her way to Madripoor, adopting the look of an old friend and fellow dark horse of the Marvel Universe, with no real goal in mind other than to fight. Thankfully, it doesn’t take long to find a place to put her skills to use. It’s here that the Soska’s give us some insight into their long term goals for the Black Widow. She’s stumbled onto the horrifying world of “No Restraints Play”, a dark web site that is abducting young girls and dispatching them in the sickest and most depraved ways. It is quite clear that Jen and Sylvia intend to take us on Nat’s journey as she puts a violent end to those behind “No Restraints Play”. Having seen their films I can only hope to see their particular love of body horror come to life on future pages.

And now on to my usual technical bits. With this being a comic book it will be a substantially shorter section than you’re used to but it wouldn’t feel right to do a review without it. Full disclosure, I’m a big fan of the Soska Sisters work. They’re phenomenal writers and directors and I love their characters. The writing here is fantastic and no less than I’d expect from them. Natasha feels hardened from her recent death and resurrection, as one would imagine someone coming back from being murdered by one of their closest friends would be. Her desire to cut loose and be free of judgment feels natural and the Soskas are showing an understanding to the depth of Nat’s needs and what drives her. Flaviano is bringing some absolute beauty to what are brutal scenes. You can feel the movement in each panel. Nothing feels flat or static. Every panel has depth and motion to it that pulls you into the story, beautifully.

To round all of this up, I really like the new run of Black Widow. The Soska Sisters perfectly understand this character, as only truly longtime fans could. Flaviano is a phenomenal artist and is doing an excellent job on every single panel. I love the setup that’s been done for this run. To start the first issue with Nat checking in on her old life, taking a moment to get some closure, and moving on to the life she needs to live, all within a first chapter that is its own story is the perfect way to start this arc. This is an awesome way to bring the Black Widow back to life and I can’t wait to see where she goes from here. I think it’s safe to say that you can check back here for more reviews as this run continues.