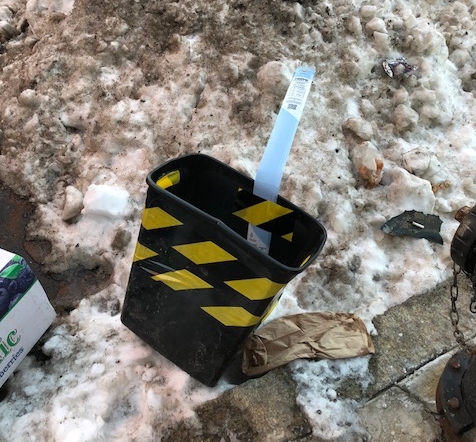 This appears to be a trash can with… some kind of plastic thing taped inside it and caution tape wrapped around it. Creative.

Boston had its first significant snowstorm of the season last week, and that means it’s time for one of the most heated debates in the city – are space savers cool or nah? Well, let’s review the facts first, shall we?

To start, if you aren’t familiar with what I’m talking about, count yourself lucky. Let me explain. It snows. People’s cars are parked on the city streets. You know, in public parking spots which they definitely do not own. They have to shovel their cars out so they can use them. Then they proceed to stick random items in that parking space when they drive away, to “claim” it for an indeterminate amount of time. All the pictures in this article are just from my 6 minute walk from home to the train this morning, in East Boston, a neighborhood of the City of Boston.

Chairs are a popular one. I don’t know if people just don’t care about their chairs in comparison to their PRECIOUS PARKING SPACE, or if they save junky crap chairs in their homes all year just for the purpose of saving a parking space in one out of four seasons.

Boston has easy to read, clear rules about space savers. (Scroll down the page a bit to find it.)

It has now been 6 days since the storm. Space savers are in rampant use and will be until the last snowflake has melted. So, good reading comprehension, everyone.

Here also please note the delightfully terrible parking job this person has done. The front of their car is basically in the lane of travel.

Look, I understand why you would like to have a designated parking space for yourself on your street. If, you know, you are one of those people who thinks owning a car while living in a city with public transportation is an awesome idea. But if you want a private, designated parking space, friends, then you pay for it. Like, by paying to park in a garage. Or living in a place that has a driveway or parking lot.

“But I worked really hard to dig my car out of that snow!” you cry, probably. Congratulations! Your reward for digging your car out IS YOUR CAR. I understand this is some kind of ingrained townie thing that is like, I don’t know, a point of pride or something? Ha ha ha look at us, we are stupid stubborn jerks and isn’t it funny that we will literally slash tires over parking spaces? How charming of us! It’s also not restricted to Boston proper, I know it’s an issue in Worcester too and probably other areas. Maybe it’s more of a Masshole thing than a Boston thing, but I live in Boston so that’s what I can tell you about the best.

Milk crate with what is (I assume?) a broken laptop and an empty bottle of Tide in it.

I saw a fight in my neighborhood a couple of days ago over a parking space. I saw it in the middle of it so I don’t know exactly the full sequence of events, but what I saw was a white van in the act of pulling out of a parking spot which seemed to be in contention, while a woman loudly screamed at the driver “Oh, are you gonna hit me now? you gonna run me over now?” as she tried to OPEN THE DRIVER’S DOOR WHILE THE VAN WAS DRIVING. To keep it super classy she was wearing slippers and had a cigarette hanging out of her mouth. OK, Doris. Relax.

NO LAUNDRY SHALL BE DONE WHILE THERE IS SNOW IN THE STREETS.

Oh look! Here is a video of Boston residents being complete dicks about flouting the rules!

Related – here are city rules about clearing snow, which a fair number of businesses and property owners are also pretty terrible about.

A 5 gallon bucket probably filled with snow. Or maybe the blood of the shoveler’s enemies.

Look let me explain why you’re wrong when you use a space saver. Ready? OK.

Random… car? …or car-related? parts in a bucket.

If you don’t buy these reasons or you need further convincing, look! I made you some illustrations to explain why all your arguments actually make exactly zero sense anyway. You’re welcome.

If you’re going to tell me it’s actually important to you not just that you get a space but that you get the same space because… I don’t know, you can’t walk an extra 20 feet? (This is all assuming you are fully-abled – there are “handicapped” [I hate that word] parking spaces designated by the city so nobody else is allowed to use those anyway.) Then you’re not cut out for city living! Congrats! Take your superfluous car and drive it out to Weston or Leominster or, I dunno, another state, like Ohio. You can park in your driveway and shovel out your driveway and nobody will steal your parking space. CONGRATULATIONS.

Do you think you have a valid argument in favor of space savers that won’t just sound like you whining? I welcome you to try to convince me in the comments. If your argument amounts to “but it’s what I want”, you are going to lose.