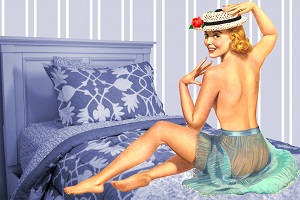 The California King Size mattress is among the most popular beds among celebrities since the 60s. Its first production was intended explicitly for stars, mostly athletes and actors. This is probably the perfect mattress for you or anyone else who desires both comfort and prestige in one package. Barbadian singer Rihanna even referred to the bed in one of her songs, among the many reasons why this bed has a global recognition. It’s different from the king mattress and the eastern king mattress which is popular in Europe, they vary in size. So, why does the California King Bed have so much popularity among celebrities? That’s what I tried figuring out, and this is what I found out.

Various tales that exist behind the production of the first California King Size Bed, probably why it attracts so much attention. There was a couple from Concord, CA that had challenges getting the perfect bed for them. The husband, David Bergeson, had what we may describe as uncommonly long legs, which would not fit on the usual king size beds. His arms were also a bit stumpy, and the ordinary beds were not just comfortable for him. He made his own bed, which was in 1982 which went on to become the California King Size Bed. This is the theory according to various furniture websites.

The other version of its history goes back to the 20s and 30s when Hollywood celebrities wanted supersized mattresses for themselves. Popularity for big beds grew after World War II which led to the production of the standard king size bed. The California King Size Bed, also commonly referred to as the Western King, has its roots in the West Coast Region.

In the 60s the mattress was designed for athletes too, aside from the Hollywood celebrities. It was after this that its production grew to accommodate other members of society.

Apart from the comfort and support that the bed offers, it’s big enough to cover most of the space in the bedrooms of celebrity mansions. If the theory of David Bergeson being the first person to own the bed is anything to go by, we can only imagine how big the bed really is. Plus, they say that it offers enough sleeping space for athletes of a tall stature.

From the first time this mattress was produced, its primary objective was to satisfy the needs of celebrities. Anything meant for stars and celebrities usually has so much fuss about it, probably because of the popularity it gains by association. Therefore, it’s a sign of prestige to own such a bed. Picturing how the mattress was portrayed in the Rihanna video for the hit song “California King Bed,” there’s no doubt that the bed is meant for the crème de la crème of society.

The Largest mattress in the industry currently measures 80 inches wide by 98 inches long; it’s called the Grand King. The California King Mattress has a shorter width of 72 inches compared to other king mattresses. Its length is what has made it famous going for 84 inches, and can comfortably accommodate tall individuals. Regardless of the size, these beds give the much-needed comfort and relation that celebrities need after a hard day’s work. The bed is big and thick enough for you to enjoy a good night’s rest!

We have Hollywood celebrities and athletes to thank for their impeccable tastes which finally led to the manufacturing of the California King Size Bed. These mattresses were first designed for the sole purpose of satisfying celebrity bedroom needs before they were rolled out to the society. They offer prestige, great support, and comfort, all at the same time!