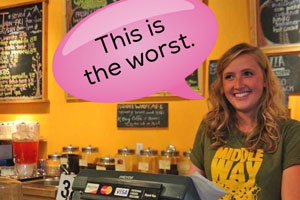 She’s not happy to serve you, guys.

Stop writing patronizing articles like this one telling poor people how to not be poor anymore. (Shout out to Joey for posting that on social media and getting me all riled up.) Why? Because your advice is not helpful, and ignores the very real problems faced by poor folks. For the purposes of this post the best I can give you as a guideline for what qualifies as “poor folks” would be people who don’t make a living wage. What’s a living wage? Well, here is a good website that can give you some guidance: The Living Wage Map. Here is a little bit of info from that page:

The map assumes by default a parent with a spouse and 2 children. Some examples:

New York NY (Acadia’s city): Living wage $26.56/hour, actual $8.00/hour, shortfall $18.56/hour
The map can also be reset to other options, like a single parent, one child, etc. Check it out and educate yourself, so you don’t go around thinking people working 40 hours a week making $10 or $11 or even $15 are going to be able to support themselves nevermind their families, in many places in this country. So that’s some background

Here’s why these articles need to stop it – because they offer advice such as the following:

Another thing that a lot of these “suggestions” seem to be OK with is the idea that poor folks should be perfectly happy to work every second of their lives, have no fun or pleasure, and just feel blessed that they have a roof over their heads.

Being Poor is Expensive

Guess what else, everybody? It’s expensive to be poor. If you don’t understand what that means, here are many articles that can explain it to you:

It’s Expensive to be Poor

Why Being Poor is More Expensive

8 Ways Being Poor is Wildly Expensive in America

Being Poor is Too Expensive

The High Cost of Being Poor

It is Expensive to be Poor

The gist of a lot of this is as follows: Having more money gives people the luxury of paying less for things.

So instead of people with money and privilege writing simplistic, condescending articles that makes it sound like working at $7.25 an hour you can somehow afford everything you need with just “a little scrimping”, why don’t we work to do things that will actually help poor folks, like, I don’t know, having free healthcare, childcare, job training and school, quality education, social services, decent public transportation and rent control in cities (such as mine, Boston, where rents are off the charts and there are no regulations)?

We, as a society, need to stop acting like poor people deserve to be poor, and work on making this an equitable society for everyone, where people don’t have to agonize over basic needs or work 3 jobs in order to afford to house the family they never see because they’re always working.