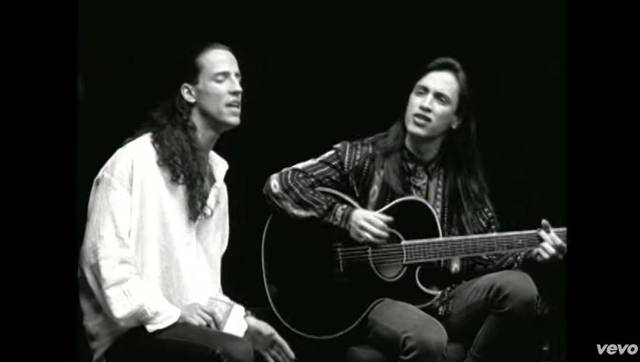 Twenty Five Years ago this week skinny crooners Extreme hit the top of the charts with their classic “More than Words”.  Not only is the song catchy, but boy is it easy to sing along to.  I remember riding in the dump truck at the cemetery (we had to go to lunch in a dump truck because, well because we liked driving the dump truck) and one time this song came on and the three of us just NAILED it.  I mean, we stayed on key and everything.  Good song.

Later Eddie Van Halen the maniac tried to make the Extreme guy the third lead singer of Van Halen which just goes to show that Eddie Van Halen was a guitar player, not a genius.  If you are gods you can change singers once.  Van Halen did it and so did AC/DC.  But NOT twice.  AC/DC is trying to replace the almost deaf Brian Johnson with Axl Rose:

You just cannot replace Brian with someone like Axl Rose. It will not be ACDC sounding AT ALL.
I’m gonna pretend I’m still sleeping

Don’t tempt fate twice.  And don’t sully the good name of the guy from Extreme (really should have looked up his name) by trying to stuff him into Van Halen.  Actually, just forget about everything to do with Extreme except “More than Words”.  They hit number one.  They wrote a hell of a song, and I for one will never forget them.  Oh, and here’s Jack Black and Jimmy Fallon doing a shot for shot remake of the weird video.  Happy Friday!  You’re old!