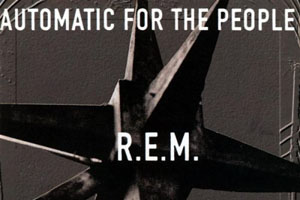 Political screed or motivational messaging to grungy youths?  “Drive” by R.E.M. could be either, or may be both.  Released in 1992 off of the Automatic for the People album, the song leads off in the first verse using the term “Bushwhacked”.  That’s why some people think it might be aimed at Poppy Bush.  Doesn’t make a ton of sense.  He (Old Bush) didn’t really do anything wrong that I know of.

Well, not when he was President, anyway.  I have heard some things about him in the old days, but that will be for another time.  For now, let’s talk about R.E.M..  This is NOT my favorite R.E.M. song but it is a good one.  I think my favorite is “What’s the Frequency, Kenneth?” but I could be swayed.  This song has a bit of a haunting quality and the video is creepy, too.  Think of how many people went home that day knowing they had touched Michael Stipe’s bony butt.  That’s quite a tale to tell.  I wonder if we could find one of them.  What an interview that would be, right?  I will see if i can get one of the interns on it.

After listening a couple more times, the song just keeps getting creepier.  Maybe I am just scared of George H. W. Bush but damn if I don’t have the shivers.

Smack, crack, bushwhacked
Tie another one to the racks, baby

I don’t know what that has to do with motivating the youth of the early nineties.  Now I am wondering what else those Georgian monsters R.E.M. are telling us subliminally.  They write a song named drive and they don’t have any cars in it?  What are they up to?  A lot of things are raising questions for me, now. Seems funny that whenever you have their songs in your mp3’s they are never all together because sometimes it has the dots and sometimes it doesn’t, you know?  Like they planned it.  Like they want you to have a bunch of dupe songs just hogging up room.  Look at this!

Yeah – my mp3’s are a mess.  And Stipe knows more than he’s saying.  What’s YOUR favorite R.E.M. song?  And does this one scare you?