Jumanji – Welcome to the Jungle – Review 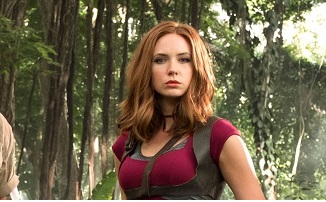 Jumanji  – Welcome to the Jungle might not be the movie we deserve, but my gah is it ever the movie we need to start 2018 off on a good note.  It doesn’t ask a lot of you and it therefore it gives back WAY more than it takes.  And for once I don’t have to worry about spoilers.  There is something comforting in knowing when you first start watching a move that, with a couple twists and turns, everything is going to be all right at the end.

It is being called a sequel to the 1995 Robin Williams movie based on the 1981 picture book (also named Jumanji) by Chris Van Allsburg but honestly I would not call it a sequel at all.  I think it just exists in the Jumanji universe.  They can probably throw some other things in the same world.  Maybe make it the same Earth as The Lion the Witch and the Wardrobe so later on they can tie it all together.  But regardless, don’t be looking for anything from the original in this one.  It does technically start in the 90s but that is just to establish the fact that the board game from the original became a video game.

This counts as a Karen Gillan tongue pic, I think. I have no other reason for including this pic.

So the kids the story is based on get fleshed out as much as needed right at the beginning.  They have Spencer the nerd, Fridge the jock, Bethany the princess and Martha who is.  Well I think they meant for her to be the super smart gal but that would clash with Spencer and she is not weird enough to be Ally Sheedy from the Breakfast Club  so I guess she is just a less funny version of Steve from American Dad.

They are all basically OK kids but each of them do something that seems pretty extreme considering the setup needed to be that they all get detention.  I suppose their crimes fit their current personalities but it still seemed like a little much.  See how much I need to nitpick?  But the run up is pretty quick and soon the four kids find themselves in the storage room of the school doing a super menial task when they find the 1997 version of the game that had sucked a kid into it way back then.

They turn the game on, choose characters and then it sucks THEM in.  Which is the opposite way the original worked.  The original brought the game into the world.  But while some dinks have used that as a criticism, I think it makes sense.  In 1995, people playing a board game were expecting to have fun in the safety of their house.  But now, video games are expected to fully immerse you.  So the change is smart in my opinion.  I don’t think these kids would be super scared of monkeys running around the school.

That’s it.  That’s all you need to know.  The rest becomes a roller coaster from a mid-sized theme park.  It is not going to peel your face off, but it is not just for kids.  It is a medium sized action comedy with the right amount of action and the right amount of comedy.  I will break it down by character, alphabetically.

You all know from the trailers that the princess becomes Jack Black in the video game version of Jumanji.  And the breathless line: “I’m an overweight middle-aged man” gives you most of what you need to know.  Black does a good job playing a teenage girl trapped in a guy’s body without just acting like a gay guy.  There is a difference and it is noticeable.  He did well and he legitimately showed some growth.  In as much as anyone does.

The Scottish actress Gillan is game to look the part of a sexed up 90s video game girl and her introverted character having to do some very extroverted things is pretty great because of how doofy she makes herself.  And her role at the end of the most exciting part of the movie shows how far she comes as a result of her experience.  And she says the wisest thing in the whole movie.  So good for her!

I am torn with Fridge / Finn.  The point was that Fridge needed to learn how to be the small guy when he was used to being the tough leader.  And Hart is the funniest person in the movie.  But if they missed the mark at all, it was because there was no reason that Fridge, who showed zero signs of being funny as himself, would become funny once he got into the game.  He learned zoology, but I don’t see how he became funny.  Maybe I am being to hard on them all, but Fridge also says one thing that should not have been let go.  He learns what he is supposed to learn, I guess, but you don’t feel it as acutely.  But yeah, Kevin Hart is funny.

The Rock has been a star since 5 minutes AFTER he put a tissue under his elbow and had this picture taken:

He is perfect in this movie.  He plays the insecurity of Spencer very well and he learns what he is supposed to learn.  And he is very “The Rock”ish the whole time but it is not overpowering.  He just does things really well and my gosh I am happy that he did this movie.  He really owns the space now.  I cannot think of another actor working today who could have done this role.  And I am thrilled that he got a hit.  I still haven’t seen Baywatch and Charlotte McKinney is in it!  That must mean it is BAD!

All in all, the movie was enjoyable and while some things worked better than others (the Nick Jonas stuff was fun) the overall movie was pretty great.  And like I said at the beginning, it didn’t try to be anything other than it was.  And while I would not say it set itself up for a sequel specifically, I still think it is little fishy that they had biggish name actors in tiny tiny roles.