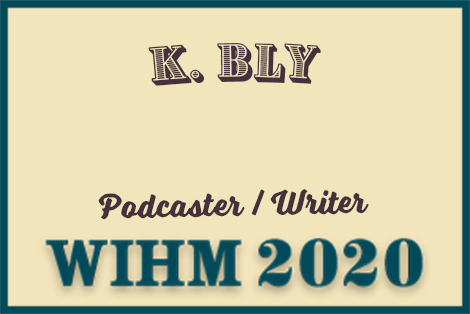 K. Bly (AKA The Lil Horror Boss) is a rookie to the Gallery WIHM event. She is a Podcast co-host, Co-Creator and screenwriter for upcoming horror anthology, horror sci-fi comic book writer.

What motivates you to do what you do?

My interest for reading and watching horror and sci-fi sparked me to want to create my own projects based off what I saw, learned, and felt was missing. I knew I wanted to write stories that brought back the classic feel of scary movies. I also wanted to people to feel connected to elements from the stories and characters. Most importantly, I wanted see people who looked like me in this genre doing more than being the token black, being the first to die, or not being present at all.

Who is your favorite woman who does what you do?

Misha Green! Lovecraft Country was one of the best parts of 2020. She brought horror in a way that has never been presented. She told stories of horror, suspense, fantasy, and cultural awareness. It was a show unlike anything I have ever watched and it impacted so many people, not just horror fans.

If you had one wish for women in your space in 2020, what would it be?

Let’s work as team players and not competitors. We operate so much better from a place of unity.

Get out of your own way!

Find a group of people who support you and will help you stay accountable. A strong and motivated support system is priceless.

A lot things! Snakes, spiders, aliens, any type of bugs really, sharks, reptiles in general; you know what, if it lives outside, I’m probably afraid of it! lol

Important Links for K. Bly (AKA The Lil Horror Boss)