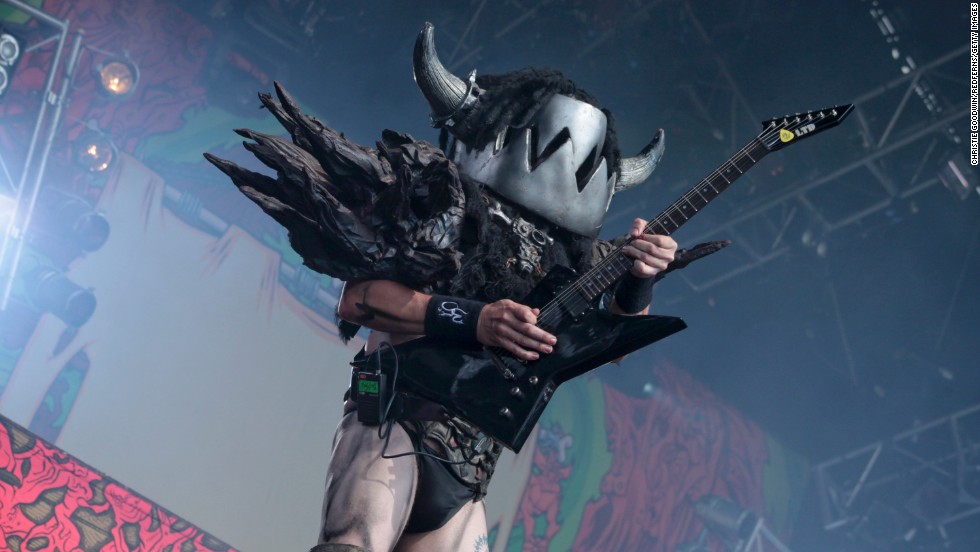 Horror is a very wide and varied genre and there’s a lot that falls under that ever expanding umbrella. Certain subgenres of music and performers are often considered to be a part of the horror and macabre communities for the nature of their lyrics or their stage presence. GWAR is one of those bands that has managed to take elements of special effects and costuming to create larger than life, evil alien stage personas to become a fan favorite both in the music industry and in horror. The band has had a long and, at time, tumultuous career spanning more than three decades and shows now signs of fading out any time soon. Their latest release, The Blood of Gods, is another wild installment of shock rock and horror that has delighted fans everywhere.

But, like any larger than life entity in the horror or music communities, the members of GWAR are not as all powerful and eternal as the personas they’ve created. Most recently, long time guitarist and band member Michael Derks (Balsac the Jaws ‘o Death) was diagnosed with Myelofibrosis after suffering from some extreme fatigue while on stage. Myelofibrosis is, essentially, a disease in which scar tissue accumulates in the bones and marrow and restricts the body’s ability to produce blood cells. Without a bone marrow donor and surgery (which carries as much as a 30% mortality rate), Derks is looking at 3 to 5 years.

“GWAR is huge, why can’t he pay for this himself?”

It seems the most common question anyone would ask of any celebrity suffering from some critical disease. After all, we expect anyone in the entertainment industry to be making big bucks and living a life of luxury. But GWAR and it’s members have always been devoted to the entertainment aspect of their performance, putting the majority of their income back into their elaborate shows, costuming, and events like the annual GWAR-B-Cue where they perform for fans. This leaves you with a group of performers who are living well enough to support themselves but without the sort of elaborate disposable income to afford extremely costly medical procedures.

While Derks’ family has created a crowdfunding campaign to try and raise awareness and money, there is still a lot to be done. With the best thing he can do until beginning the more than year long process of eradicating the disease and rebuilding his immune system, he’s decided to continue with GWAR on their North American tour, monitoring his condition at various hospitals and clinics along the way. Meanwhile, GWAR has teamed up with Champion Brewing and Cigar City Brewing to bring together a lineup of great musicians in the Richmond for a special event to try and raise money and find a donor for Derks.

The Benefit for Balsac is both a benefit concert and a celebration of the career of Michael Derks being put on at the Champion Brewing Company in Richmond,VA. The day long event is going to feature live performances, DJs, raffles, games, and much more to try to save the epic guitarist. Cancer organization Love Hope Strength will be on hand to test anyone who is willing to see if they could be a suitable donor match. Meanwhile, in addition to raffles and the sale of some classic GWAR merchandise, all beer sales are going to help pay for treatment with auxiliary staff and entertainers donating their time and efforts to help. This is going to be a one of a kind show and, if you’re fortunate enough to be in the Richmond area on Saturday, you need to get out there and check it out.

All the details on who’s playing and raffle prizes can be found through the event page located on the official GWAR Facebook account. Doors open at one o’clock on April 7th and the show is scheduled to run late into the night. Like many of us out there creating film, literature, or music, the main drive behind it isn’t money but a passion for the work you do. Michael Derks and his GWAR bandmates exemplify this with their dedication to their craft, their showmanship, and all the loyal Bohabs who’ve been following their career since the 80’s.  Help save Balsac and contribute to the fundraiser today. Otherwise, get out to Champion Brewing Company on April 7th, get swabbed to see if you’re a match then drink yourself stupid and rock out like a monster to help save Balsac!