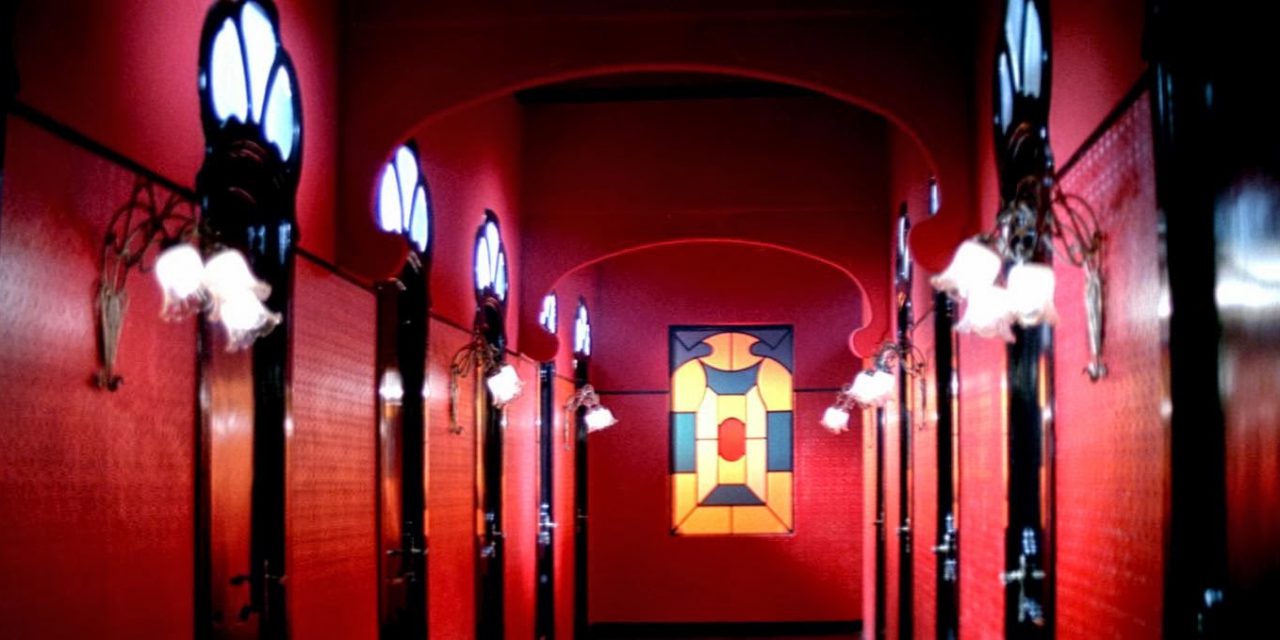 Welcome to Let’s Scare Jenn to Death, the year-long experiment in making Jenn watch movies that she would never choose on her own, because she is a scaredy cat when it comes to such things. Why are we doing this? Well, the pretend reason is to expose Jenn to the richly satisfying subculture of horror movies, and hopefully kindle in her an appreciation for the artistry behind the cheap, exploitative, blood-spattered veneer that has repelled her for her whole life. It’s culturally important! But the real reason is to take amusement from Jenn’s palpable and comedic discomfort from watching things which scare and distress her! OH MAN THIS IS GONNA BE FUN.

Let’s talk a bit about our first selection, Suspiria, and why it was chosen. Without getting needlessly mired in film minutiae, Suspiria is a 1977 film directed by Dario Argento, a master in the field of Italian horror, notably the “giallo” type. Giallo, as a subgenre, is identifiable by several traits: vivid, dreamlike imagery; stilted dialogue delivered by multinational casts; and beautiful young women imperiled by evil forces, either murderous or mystical.

Suspiria is an archetype, not only of “giallo” film, but of horror in general. It’s one of the most significant films on this year’s list, well-loved (93% on Rotten Tomatoes!), while being mostly under-the-radar to general public, in a way that stuff like Halloween (1978) isn’t. Never having seen it, most adults could still relate the general conflict, character names, and overall concept behind Halloween, while Suspiria is inscrutable to anyone who hasn’t seen it. Even the title (which translates to “Sighs”) gives almost no clue as to the concepts within. So Jenn would be going in cold, the best way to watch a scary movie.

Suspiria is also one the prettiest of the films chosen for Let’s Scare Jenn to Death. In a genre known for assaulting the viewers with grim, repulsive sights and sounds, Suspiria is much the opposite, with a sense for composition, set design, and most strikingly, color, that can accurately be described as sumptuous. Much has been written about Suspiria’s color design (by more eloquent writers than I), so I won’t go on any further about it, although I will say that the film’s eerie, pulsing score by prog-rock group Goblin is almost as good. In any case, for probably sexist reasons, I thought Jenn might find a beautiful scary film an easier first-watch than something more visually ghastly. There will be time for crass ugliness later!

Lastly, like several other movies on the Let’s Scare Jenn to Death list, Suspiria has a woman protagonist (an almost entirely woman cast, really). Without understating it too much, horror movies have a thorny relationship with gender roles. Women are traditionally the most common victims of the various evil forces in horror movies. Possessing devils, serial murderers, aquatic rapists from the deep, and various other surrogate agents of patriarchal control all seem to prefer women as victims. The “final girl” has gone from in-joke to ubiquitous cultural trope in a span of what, fifty years? The probably unintended side effect of all this cinematic sexism is that in horror movies, the audience almost invariably spends more time with women characters than with men. It’s not progressive, exactly, but it is notable. One place actresses can be counted on to play the lead is in horror films. And there are great performances (lots of them!) to be found if you look.

Now, we all want to get to the part where we find out how terrified Jenn was, but at risk of wearing out my rhetorical welcome early, I’m going to describe three facets by which we can judge horror movie effectiveness – how scary it is. This is outside the effectiveness by which any movie can be judged (whether the story made sense, whether the set pieces were skillfully built, whether the actors gave good performances, etcetera). Anyway, these three facets, critical to scary movies, are dread, shock, and horror.

“The Invitation” – a movie full of dread.

Dread is an ongoing atmosphere of foreboding, during which perhaps nothing overtly sinister is happening, but mundane aspects of life take on an eerie or threatening aspect. Dread is the emotional state upon which a horror movie coasts, ideally priming the pump for later, more intense thrills.

“Scream” – a good example of shock.

Shock is the cheapest currency a horror movie can spend, and many low-quality horror movies overspend it. It’s created by sudden outbursts, loud musical stings, even innocuous cliches like the ubiquitous “kitten scare.” Shock is a release valve for the dread built up during a film’s quieter moments, a burst of welcome adrenaline for an engaged audience.

Horror, the sensation after which the genre is named, is a sense of visceral distress, a primal discomfort created in the audience, a feeling that the events witnessed have gone irrevocably wrong, that no one exposed to such circumstances could come away unchanged for the worse. While explicit, grisly violence is the most common and dependable vector for triggering horror, it’s a testament to the creativity to writers and filmmakers that so many different ways to create a feeling of deep, nauseous repulsion in an audience.

With these (by-no-means authoritative) criteria for judging horror movies established, we can now begin to see how far we are along, in our attempts to scare Jenn to death!

Okay, Jenn, you’ve now watched Suspiria, an obscure-ish classic of Italian horror. As someone who never watches horror films, were you scared at all? Are you dead or near-death? Did you think the movie was worthwhile or even enjoyable? Looking forward to another 11 films over the next year, are you encouraged by your response to Suspiria, or dreading further explorations of the genre?

I’m sorry but I have died and I cannot finish the movies. This is my ghost. I leave my cats to Acadia, they will probably hate or fear both of his cats, so he’ll have to buy a second house just for a couple of the cats to live in. This is my ultimate revenge.

OK, not really because ghosts aren’t real. I am alive. This startled me a few times but didn’t really scare me, probably because it was so over the top that I found it implausible. I am looking forward to the rest of the movies because when I think of horror movies I basically think of Nightmare on Elm Street first, which I made the mistake of watching around age 12 and that’s exactly the kind of movie I hate. Lots of gore, lots of jump scares, lots of women running into basements where the killer definitely is, that sort of thing. I’m looking forward to what else you have picked out!

Before we get to the multitude of things that scared you, were there any moments that took you out of the movie? Any anti-scares? The weird Euro-ness in Suspiria (and a lot of giallo) can be off-putting. I get that the audience is meant to empathize with Suzy’s alienation, but some scenes can be unintentionally comic. Did you have a similar reaction?

Yes there were some ludicrous scenes. I yelled at the TV a lot. It’s too bad I didn’t have my video camera setup ready to go yet so you readers could all experience this. You can look forward to that for the next 11 though! One of the creepiest parts actually was really near the beginning, when you see the woman who (spoiler) later ends up dead after leaving the “dance school” running through the woods. A lot of the later stuff that was supposed to scare me had me rolling my eyes.

How about the characters? Is Suzy worth a damn, or is she a disposable ‘final girl?’ How about her fellow snake, Sara? Do the antagonists have any sort of plan? Does the ballet academy/coven reveal come too late in the movie? Is there a strong narrative, or is Suspiria kinda just a bunch of scenes that happen? Who even was the killer?

I feel like Suspiria is kind of just a bunch of scenes that happen. Some of them are actually pretty cool, while others are ridiculous. The sets and colors are crazy in a good way, the “story” makes very very little sense, and I don’t really care about any of the characters. I sort of want to give Suzy some credit for having a little chutzpah by the end, but it’s still sort of very little. The effects in the big climax are super silly and it makes it hard to take seriously.

Yeah, it’s hard to see Suzy as having a lot of agency when she spends most of the film doped up. Sara does most of the Nancy Drewing, and ends up with her throat cut, tangled up in razor wire.

I can’t figure out why on earth the ballet school even exists? Do they… do they actually perform ballet shows? Or…? Are the dancers in the coven? What’s going on?

I love this movie, and I don’t have any clue, not a Scooby Doo.

There’s a remake of Suspiria in post production, as we speak, with Tilda Swinton and Chloë Grace Moretz, and Melanie Griffith’s daughter. Having seen the original, would you investigate such a thing?

Whoa actually yes. I would be really interested to see a remake. I could see it either being really cool or really ridiculous. Tilda Swinton makes me think hopefully it could be really good.

So, I blathered on about dread, shock, and horror. Was there anything you felt exemplified any of those precepts, for you? On a scale of one-to-five severed Acadia heads, can you put a number on how well the movie did at providing those things? This is a theme we will revisit in subsequent movies, and the internet loves rating things on a scale, so let’s have at it.

For dread I give it 4 out of 5 Acadia heads. The music and the crazy filming choices and intense colors make you feel disoriented and like something bad could happen at any time. So that works pretty well.

For shock I give it…. 2 of 5 Acadia heads. Most things didn’t really startle me and even if they did a little, the effects and such were not convincing so I didn’t actually get scared.

For horror I’d say 1 of 5. None of the gore or gross-out stuff was realistic at all. Everyone who was bleeding looked like they had strawberry sundae syrup on them or red house paint or something. Nothing else I can really think of in this movie that would seem to aim to create a sense of horror. The one real gross-out moment was the maggots falling out of the ceiling.

Finally, what moment will you remember when you think back, years from now, to that time you watched a weird Italian horror movie about a ballerina who accidentally uncovers a coven and kills a witch?

The maggots falling through the attic floor boards into everyone’s hair brushes, food, etc. I am genuinely horrified by maggots and that was really gross.