My Enemy the Bra 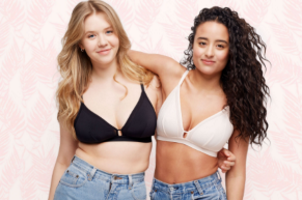 First thing I have to do writing this post is find a way to link you to the clip of BNev and me complaining about how much we hate bras, since Acadia is a jerk and our cancelled podcast Waiting for the Train is no longer hosted online (feel free to leave comments about what a horrible monster he is below). So come back again soon to see if I have found a link to the podcast where we explain why bras are the worst. Hear us baffle Acadia with the hard truth of why it’s such a pain in the a** to deal with these things.

Next I will tell you that no, there will not be any photos of me in a bra in this post. Sorry not sorry folks, the zero dollars I’m getting paid isn’t enough for me to “dump ’em out” as Acadia likes to say so charmingly. OK now that that’s out of the way we can discuss some problems with bras, bra-fit, misconceptions about size, and I will review for you several relatively good examples in a sea of bad, and give you some recommendations, boob-havers of the world.

This is the closest you’re going to get to me modeling a bra on this site. I am definitely wearing one of the below mentioned bras in this picture. You’re welcome.

Off the top, I’m going to be discussing things in broad terms. Please know that I am trying to be inclusive with my language but I am completely aware and want to point out to all readers that non-binary people exist who don’t identify as man or woman and that they may have boobs. Also, please know that trans women exist and they may not have boobs but they are still women. I’m going to basically use man as a shorthand for a person who identifies as male and doesn’t have boobs, but woman as a shorthand for anyone who has boobs and wears a bra, because this post is about bras, so people who don’t have or want boobs don’t know about bras, and people who do have boobs do know and care about bras (if you don’t have boobs but want them then this is also a good source for future reference). If I eff up feel free to tell me in the comments.

First of all, most women wear the wrong size bra because nobody ever really taught us how a proper bra should fit. That’s not your mom’s fault, because nobody taught her either. But before we get to that, let’s get one important thing out of the way: Men know almost nothing about bras and bra sizes and what they mean, practically speaking, on an actual live woman.

For example, the size that seems to be most often referred to in general in society as what generally seems to be accepted as excessively large boobs is cup size D. Well, I wear a G my friends and I promise you that’s not what you think it is. I have actually had a man try to argue with me about what size bra I wear until I went and got one of mine and showed him the label. Also an F cup on a bra with band size 30 is not the same as an F cup on a bra with band size 36. I wear a 34F in some brands and a 32G in others. Guys, trust me, a B can look big and a D can look small. You have no idea what’s going on in the bra size department.

Additionally, most women, if they have not been professionally fitted for a bra, are wearing the wrong size – usually the band is too big and the cup is too small – and most women also don’t know some basic things about how to wear and adjust their bras, as evidenced by this recent firestorm on Twitter. Until I had a professional fitting I was wearing a 36B. That’s quite different from a 32G.

Here are some very useful things I have learned about bras which have made my life much easier, and which I now share with you in the hopes that it will make your life easier as well:

The Band is Where the Support Comes From

The support for holding the weight of your boobs, and for holding everything in place, in a properly fitted bra, comes from the band that goes around your ribs, not the straps that go over your shoulders. Kind of like how a proper backpack (I’m talking backwoods camping backpack not something you use to carry a notebook in third grade) has a band you wear around your hips, and puts the weight of the pack there, while the shoulder straps just kind of keep it from falling off your body. That’s pretty much the same way a properly fitted bra works. If your straps are digging into your shoulders and carrying the weight of your boobs, your bra is wrong. It’s either fitted incorrectly or it’s poorly made.

You Don’t Wear the Same Size in All Brands

I couldn’t tell you why, but frustratingly, just like regular clothes, you probably don’t wear the exact same size bra in every brand of bra you want to wear. Within a brand, the sizing should be consistent. But if you’re trying a new brand you should really try it on before you buy, or accept that you might have to do a return or exchange. I ordered a bra online in a size that’s perfect for me in one brand, and I can’t even fasten the new one. Oops.

Despite what it looks like, a more structured bra with stiffer material, less stretch, more underwire, more hooks, will probably feel more comfortable, because it will do its job better. A bra that’s soft as a baby chick does you no good if it slips all around, the straps fall off, or your boobs fall out of it constantly.

OK here are my personal recommendations. My favorite overall general, everyday, underwire bra that does well with support, doesn’t show under clothes (they have a good range of actual skin tones, not just 1 or 2 – see header image), and is well-made is the Thirdlove T-Shirt Bra.

They have a pretty good range of sizes, and it’s a nicely made bra that I can wear all day in relative comfort.

Next, despite the more structure is often better rule, I have been on a mission to find an underwire-free bra for a while because even though they do have a lot of benefits, sometimes I want to feel less… held in place but still wear some sort of bra. I have been on the hunt for something more like a “bralette” for a while, but they are hard to come by for anyone above an A or B cup. However, I have some success to report!

I like the Knixwear Evolution Bra. I will warn you the sizing is a little hard to figure out and I don’t think it works for everyone but they are really good about returns/exchanges in my experience. It’s sort of like a light-weight sports bra but it doesn’t give you uniboob. It’s also moisture-wicking and quick-drying. I wear it especially in the summer a lot because of this. Oh! It’s also reversible and you can wear the straps either standard or criss-crossed (racerback).

I’m a pretty big fan of the Lively Palm Lace Busty Bralette, though it might be just barely too small for me. Ha. But it’s stretchy and comfortable, no underwire, but still has a good amount of support.

My current all time favorite though, is the kind of ridiculously named Cosabella Never Say Never Curvy Sweetie Bralette. It’s lacy and pretty, definitely has enough support, doesn’t smash your boobs, comes in pretty colors, has no underwire, and is so comfortable that I really do sometimes forget I’m wearing it. I wish I had one in every color but I need to peter out my bra love and not spend an entire month’s budget on just bras.

In addition, here are some bra lines I haven’t tried but which sound promising for various reasons:

Hey, if you have a favorite or a most hated bra or really any story at all about the woes of trying to find a good bra, please tell us in the comments!