Poor Xander from Buffy Went to Idaho and Got Arrested 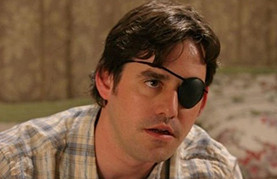 According to CNN, poor Nicholas Brendon (Xander from Buffy) got loaded and started an altercation at Tree City Comic Con in Boise, Idaho.  A few things.

Oh, and Brendon married some nobody names Moonda Tee in Vegas a couple of weeks ago.  This is their wedding picture.

Well now I’m sad.  He got married in front of the Vegas sign with his sunglasses stuck in his T Shirt to a chick whose name sounds like she was born on Tattooine.  Someone needs to open the Hellmouth back up and do a reunion, stat.  Willow can’t milk the royalties from HIMYM and American Pie forever.  I don’t think.