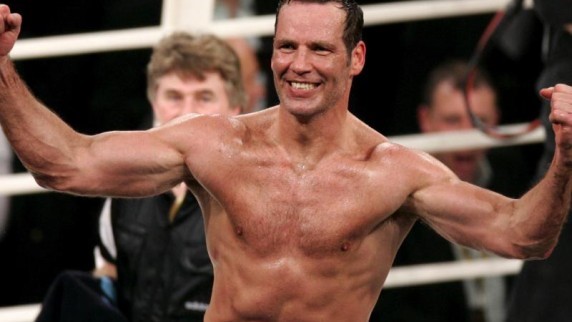 Any idea who that guy in the picture up there is?  Me either.  Turns out it is a German Boxer named Henry Maske.  The song Time to Say Goodbye, was performed by Sarah Brightman and Andrea Bocelli at Maske’s final fight.  Then they decided to record it and now it is he best song in the history of “mumble softly until the words you know and then GO FOR IT!” songs.  It beat out My Sharona which had held the record for the previous 15 years or so.

It’s a really pretty song.  For some reason I thought Sarah Brightman would be blonde and Bocelli wouldn’t be blind.  At least I think he’s blind.  He sort of has that Stevie Wonderish face, you know?  Anyway as I said the song is really pretty and the fact that the saddest lyric is the only one in English somehow makes it cooler.  Well, I guess thinking about it, if none of it was in English it would sort of suck unless you spoke Italian.  I thought about putting the lyrics in here in English but they sound really stupid so you have to just imagine whatever sad crap you want unless you speak Italian.

Oh, and you can assume that one part goes: Tsunammmmiiiiii Poonannnnnnniiiiiii like I do.  That’s actually one of my favorite parts of the song.  Let me know if you even know what part I’m talking about.  It is one of the three parts that aren’t in English that  I consistently remember.  The others are “tutti” and “con me”.  The rest is pretty much a blur of gibberish.  Speaking of blurs of gibberish, this is a fitting song to use as my vehicle to tell you that I am no longer going to do this column every week.  Probably.  It’s been more than five years and honestly we are still losing to a drag bar in Google for the term Friday Nineties.  I made the goddamn thing up and I still can’t get any ranking.  Not that anyone was searching for it but still!

Anyway, the bit itself isn’t going away but I am going to let other people write it, or skip a week, or post a bunch of pics of Charlotte McKinney.  Who can say?  Let me know what your favorites were from the past if you have any, and other stuff you would like to see or other people you would like to see writing.  Like I said I don’t want to kill the column completely.  I just know that it’s time to say goodbye.