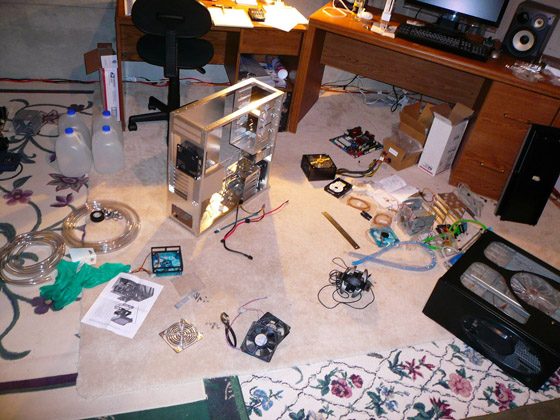 Please disregard the four gallons of water and the rubber gloves. They are part of a very different, sexier project.

You know what cool people do on Saturday when it’s 95 degrees outside?  Me either.  So I’m gonna take my computer apart.  Why?  Well, apart from the fact that your mom  is out of town and I’m bored, I just remembered that I put an extra hard drive in there like a year ago but didn’t have the right wire or some gay shit so I just closed it back up and forgot about it.

So going to Best Buy and getting some weird wire and then coming home and ruining my sweet computer seems completely logical to me.  I’m pretty handy, you know.  One time I fixed my car by buying another different car and years ago I repaired a rocky relationship by moving to another state.  So my working plan is this.