The Beast of X Moor – An Enjoyable But Predictable Horror Thriller 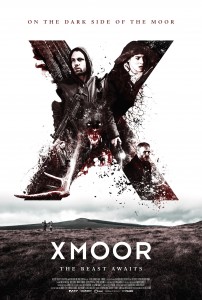 As a dedicated horror fan there are always some tropes that you have to be prepared for. Promiscuous alcoholic teenagers are definitely going to die, the killer is never who you’re lead to believe it is, running away involves more falling down in 30 seconds than would normally happen in an entire lifespan, and the killer isn’t really dead until they can get that one last jump scare in before the Final Girl puts them down for good. There are far, far more than that but the point is that you’ll always know to be prepared for certain things to happen in a horror movie. That doesn’t mean you won’t enjoy the film, get a good scare out of it, and generally have a good time but we all know to be prepared for certain things to happen. The Beast of X Moor comes with a very healthy dose of horror tropes, very obvious ones in fact, but that doesn’t make it a bad film. Predictable? Yes. Bad? No.

The Beast of X Moor, writer and director Luke Hyams feature film debut, is the story of two American documentarians, Georgia (Melia Kreiling) and Matt (Nick Blood), along with their guide Fox, that head into the fore

st in Exmoor in search of an elusive beast killing the livestock on local farms. The beast in question is the often witnessed and hunted, though never caught, big cat cryptid that has been seen all over the UK. What they find in the woods is, mild spoiler warning here, clearly not a big cat. When I say mild spoiler warning I suppose I should clarify that said warning is not for longtime fans of horror films. If you’ve been watching horror films as long as I have this “twist” will be about as surprising as the sun coming up. This doesn’t make it a bad film and shouldn’t be a reason for you not to watch it but it definitely makes it a formulaic, by the numbers, not terribly surprising film.

Now let’s move to my usual bit about the technical aspects of the film. There are definitely some cringe worthy lines and scenes in this film but they’re not of the film ruining variety. For example, one of the characters introduced later in the film delivers a line that is meant to be horrifying and impactful but comes off as corny and almost comedic.

Despite this being a vague description, if you watch this film you will know exactly which line I’m referring to. It genuinely gave me a little chuckle that was absolutely not the reaction it was meant to produce. This is not to say that the writing was all bad but it’s not what I’d consider “Oscar worthy”. The cinematography is well done and makes the forest locale feel properly creepy and foreboding. The action sequences are all shot cleanly, without so many quick cuts that it becomes nauseating. This film makes an interesting jump between the found footage style that has become popular and traditional cinematography. The guide/hunter sets up a CCTV system in the woods to help them in catching their prey. This is used cleanly and didn’t feel like they were shoehorning it in to save costs. The score definitely sets the mood for the fear and panic that the group goes through as they hunt their prey and then are hunted in return. It builds tension and adds to the fear as a proper score should. All of this goes into making a decent film that is well produced despite its predictability. Again, this is a predictable film but it is still well made and worth the watch.

So here’s the thing. If you’re picking up this film hoping to be shocked by a twist ending and some straight up horror, which the marketing will absolutely tell you this is, you’ll probably be disappointed. This was definitely marketed as a horror film, especially considering the cryptid angle of the hunt for a UK big cat and the big reveal of the hunt’s true purpose, but this really is more thriller than horror. All of the actors turned in strong performances, especially that of Mark Bonner who makes his character Fox, just the right amount of unhinged. Georgia, our inevitable Final Girl, is played as tough and capable of kicking enough ass to not need rescued every five seconds. There are some scenes that caused some decent confusion. Whether it was the writing, directing, or the actors’ delivery, there are parts that make it hard to determine if the character is hallucinating, reaching their paranoia breaking point, or are straight up seeing some actual ghosts and supernatural happenings. Part of this, at least in my opinion, comes from the characters having to deliver their performances in grainy CCTV footage or the darkened woods. It was a really cool effect but I can easily see how that might make some new and interesting dynamics in the actors’ delivery. The group was well cast and I enjoyed their performance but there were definitely some times that the delivery was a bit muddled.

All in all, this was a decent film. It is by no means perfect but it is also not a terrible film. I honestly don’t think it earned the “horror” moniker, at least not where I’m concerned, but it did make for a fun thriller that I enjoyed despite it being predictable. From a numerical standpoint I’d give The Beast of X Moor a 3/5. It’s the cinematic equivalent of IHOP. You know exactly what you’re going to get right from the start which is perfectly fine but it certainly isn’t something you’re going to write home about.