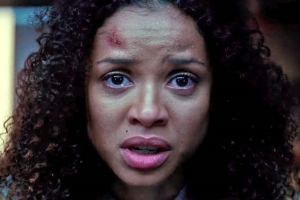 Despite harrowing illness I stayed up last night to watch the new Cloverfield movie and review it for all of you people because that’s how dedicated I am!

I’ve decided to make this spoiler-free (or at least no more spoiler-y than the trailer itself) because I bet not THAT many people stayed up till 1am watching this last night.

Starring Gugu Mbatha-Raw as Hamilton, the movie opens in the time period not long before the first Cloverfield movie (you know, the one that was just called “Cloverfield”) takes place. From the trailer you know that she ends up in space, so I won’t spoil the details but the opening scene of the movie, with her husband Michael (played by Roger Davies) does a good job of convincing the viewer of the necessity of her mission.


The setup being that the crew‘s mission is very important for everyone on earth and that they hope to be done within six months is a good device to make us feel on edge quickly as time ticks by and they become more uneasy about the mission’s success. Tensions build and resentments become more pronounced. It’s something that has played out in a lot of “crew on a long space mission” movies and TV shows before, and it’s especially well-done given how high the stakes are in this case. And, of course, given what we already know about the Cloverfield universe (assuming you have watched the other two movies – if you haven’t, watch them first before you watch this one – that’s a requirement.)

This innocuous closeup comes at a crucial moment in the movie.

And of course, things start to go wrong eventually. Not just crew stresses, big things. I mean there’s this scene, which is in the trailer:

Yeah, sh*t gets weird. Man, it’s hard to write a spoiler-free review of a movie. Maybe I should do a spoiler-filled one as well a little later.

Let me tell you without telling you some things – this movie explains why the first Cloverfield movie happens. It also has a lot of great classic themes like what is and isn’t worth sacrificing for the good of others, for the good of a few others versus many others, for your family, for yourself, etc. If you enjoyed either or both of the other movies you should definitely watch this one. I’ll leave you with some unexplained stills from the movie. Check it out and tell us what you think in the comments! (Note – there could be spoilers in the comments, I’m not responsible for that!)