The Stephen King Collection only REAL Diehard Fans Know About 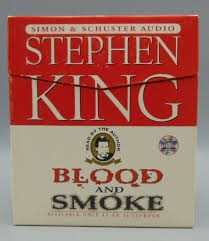 Earlier this year I was gifted with one of my prize possessions in my Stephen King collection. For some background, I have been collecting his first edition hardback novels for years and am proud to say that I have acquired them all! My work bestie surprised me during a team meeting with this rare audio book called Blood and Smoke. This audio book is old school as it is a collection of short stories narrated by the master of horror himself, Stephen King. Oh, and they are on tapes!

The audio book was released in 1999 and the packaging resembles a pack of cigarettes because each story has a focal point on smoking in one way or another. Now if you are like me and you keep pretty much everything, then you may still have an old boom box that plays tapes. If you don’t, it’s okay – this collection is available on Audible as well.

King narrates three short stories, Lunch at the Gotham Cafe, 1408, and, In the Deathroom. Two of these stories King initially said he wouldn’t publish; however all three were released in his short story collection, Everything’s Eventual.

This is a rare gem to add to any King collection if you are lucky enough to find it. And who doesn’t love it when King narrates his own works? It adds an extra layer of creepiness to the stories in my opinion. Check out my review on the audio book in the limited series ’31 Days with the King’ on Superficial Gallery’s YouTube Page. Video posted below. Be sure to subscribe to superficialgallery.com to receive the latest in horror and pop culture news and head over to YouTube to subscribe as well. Hit the notification bell so you know when new content is posted.