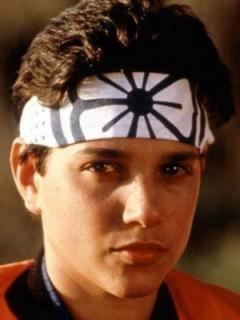 I am Daniel-san. I was the kid who practiced ninja/karate moves from magazines in the secrecy of my bedroom. I dabbled in martial arts, praying that one day an elderly Japanese man would take me under his wing and give me a cool car after teaching me to wipe the floor with my bullies. None of the reboots or sequels captured the magic of the first one, but that didn’t stop me from gobbling them up.

Cut to this morning when I saw that streaming service You Tube Red will be trying to make me tap my nostalgia vein – or perhaps the blood vessels under my toenails – and for $9.99 to watch Danny and Johnny (Ralph Macchio and William Zabka) square off as adults. The original actors will be reprising their roles. No word if they will pull a force ghost and dig Pat Morita up from his grave digitally. I am interested enough to see if I can dredge up the money from my couch cushions/kids’ college funds for a month or two. The idea of Danny as a car salesman is actually pretty amazing. Johnny would have to be the sort of washed up, roided-out Trump supporter who would try to recapture the glory days of teaching leg sweeping and kneecap breaking. I can see that.

The question is, will they play it straight or make it a little campy? I think success will depend on a light touch with the latter but keeping it firmly in the quasi-reality of the original movie. You have to appeal a broader audience if you’re going to teach Crane-style to a new group of folks.
Filed under: Cobra Kai, Karate Kid, Pat Morita, Ralph Macchio, William Zabka