The Woman In The Window by AJ Finn 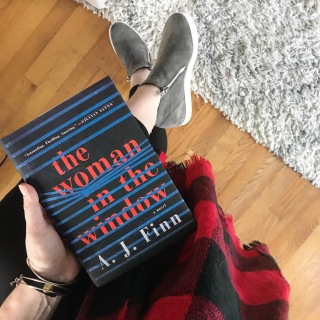 I went into AJ Finn’s The Woman In The Window more than slightly skeptical. A marketing darling, a “like Gone Girl” psychological thriller and movie rights already sold. Marketers, and Book Editors/Publishers that lean heavily on them, aren’t generally the best judge of what makes a good book. I mean, The Girl on The Train caught much of the same fire, best-seller for many weeks, movie right away, and is an unequivocally awful book.

But, ultimately, the author delivers a very enjoyable read that is at least more like Gone Girl than The Girl on the Train was.

Let me talk for a moment about what the book is about: An agoraphobic woman stalks her neighbors from her window, doesn’t leave the house, befriends a new neighbor and her son, thinks that woman got murdered, thinks the boy is in trouble, drinks a lot of wine and mixes that with pills, then is told there was no murder and she’s crazy.

I’m a sucker for a “like Gone Girl” shout out. That was a great book. Gone Girl transcended the genre, or, at least, peaked it. The Woman in the Window is cookie cutter and creates zero new ground within the thriller genre. There is something to be said about doing a formula really well. But, to be clear, the book takes no chances. In fact, it introduces so few characters that the unraveling of the murder mystery is really just a 50-50 shot for the reader. For the most part, though, I was OK with that.

Where the book succeeds the most is in the middle of the story. I found the opening third of the story a bit pretentious, more on that in a moment, but, when the book starts to round a corner into the plot, it becomes a very enjoyable read. Stephen King labeled this book “unputdownable” and I think that’s apt. You want to find out what happens to this Woman and her window and the book does a fantastic job at creating a spiral in the middle section that feels very dizzying as everything collapses around Dr. Anna Fox.

See, when I mentioned the wine and the pills, that brought the book into unreliable narrator territory. That’s tough as hell to pull off and can easily go wayward. Nothing goes wayward here, you know, the whole lack of taking a chance thing. But, still, it’s a very skillful technical display.

Let me just get this critique out of the way: The first third-ish, of the book is rather pretentious and mostly written in a way that wants the reader to remember certain technical things in a positive light when they’re engulfed in the popcorn thriller nature of the books remainder. Finn is fluid with his prose, but, takes too long to get to a point at times and overdoes it a bit with word selection. About 100 pages in, this was draining.

“Outside, a light snow began to shake down, frail little kamikaze flakes smiting themselves against the windows.”

Most of the first third suffers from a lack of character development, mainly because they want to keep their reveal under wraps. I’m not about to call it a twist. It might have been conceived as a twist, but, in execution, it’s a reveal. It’s presented as a twist. But, if you don’t see it coming, I mean, what the hell is wrong with you? If this is your first time reading a book, ever, actually, no, even then, you know what is coming.

So, ultimately, there was no point in sacrificing character development at the sake of upholding that moment. Of course, the other way the author could have gone were instead of dropping literal cookies onto the ground to lead into the twist, the author could have gone for crumbs along the way. But, that is risk-taking, of which, this book was not about to partake. And, so we get the rigid structure of a twist, that isn’t a twist, and, for me, it led to putting down an unputdownable book for the night.

That middle third of the book before this is really good, though.

The final third of the book is Thriller 101. The reveal of the murder mystery, I believe, is going to play out very well in a movie theatre. In terms of the book, as mentioned, the author plays it very safe. The amount of characters is kept to a minimum so that when the reveal lands, you don’t react with any kind of distaste. Everything makes sense, and, that’s about as far as I can go without reaching spoiler territory.

I’m going to circle back to Gone Girl, because, I think how one viewed the ending to Gone Girl may be indicative of how they view The Woman In The Window. First, it’s a worthwhile read for anyone who enjoys the thriller genre. But, also, if you hated the Gone Girl ending, my guess is that you will enjoy this one more than most. If you liked the Gone Girl ending, and prefer your psychological thrillers to leave you in thought a bit more, then The Woman in the Window likely peaks as simply a fun read.

There’s nothing wrong with a fun read.

Also: not sure how I feel about the create an ambiguous identity so that people think possibly a woman authored the book. I had no where else to throw that line in that made sense, so here we are.

Filed under: AJ Finn, book, The Woman In The Window