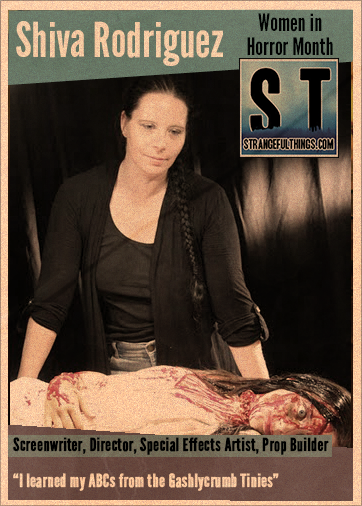 My first love was doing special effects and FX makeup, which I tortured (eh, practiced on) my kid brother and friends with all through my grade school years.  Got my start working professionally at horror attractions, including Orlando’s famous Terror on Church Street, in the mid 1990s and then writing/producing/everything else Grand Guignol-style theatre later on.  Started writing screenplays around 2003. Moved into actually working on film sets in 2008.  Started directing in 2013 after being talked into it (as in, practically blackmailed) by some people I’d worked with before. I’ve since directed several projects and am currently working on two more.

I credit my father for my love of horror. He had a twisted sense of humor and used to read me bedtime stories from Edward Gorey.’s Amphigorey series. (It could be said that I learned my ABCs from the Gashlycrumb Tinies).  He was also the one who would rent me every horror movie he could find at the video store when I was a kid because he knew I was trying to figure out how they did the special effects.

One of my favorite past projects as a special effects artist is “Dangerous People” directed by Garo Nigoghossian. It was shot around 2012 and really stands out in my mind for two reasons: First of all, Garo was really great about being open to suggestions and even took an extra day to shoot an effects scene that went from being a standard bludgeoning to impaling an actress on a protruding tree branch after I’d gotten a look at the set. And secondly, because I’d always refused to do male genital mutilation (I consider them to be the fart jokes of horror movies used for a cheap cringe) but the script made me reconsider that. “Dangerous People” is now available on Amazon.

Another favorite SFX job was on the short film “The Figure” in 2016. I also directed and co-wrote it. It is a parody of masked killer / slasher films and when my partner and I were writing it we were wracking our brains trying to figure out a murder weapon that we’d never seen in a movie. Then it came to us… Pan Pipes! We had a lot of fun building that gag and executing it on camera. That film can be found on YouTube here. (Editor’s note – JUST WATCH IT HERE!)

My most successful project to date is the short film “The Family Way: Coming Home”, which I directed and co-wrote in 2017. It was done as a prologue film to a feature film that’s currently in development called The Family Way. I spent most of last year touring film festivals with “Coming Home” and it was released on Amazon in December.  I’m currently helping out with trying to find investors for getting the feature film The Family Way into production this summer, which I’m also to be directing.

That’s really hard for me to say, since I tend not credit my gender for mos of the positive or negative things that have happened so far. I don’t believe that I’m quite what people expect a woman on the set to be like in my usual crew positions.

I’m used to the idea that people make raunchy jokes on horror sets (particularly during really dark scenes) to break the tension. I’ve been on sets where the guys have held back until they realise that I and the other females I work with can get pretty raunchy ourselves, and then the ice is broken and everyone has a good time cutting loose with off-color jokes without being offensive. (I usually warn newcomers to one of my sets that on my very first film as a director the green room chatter went from French Cuisine to Brazilian Donkey Shows in less than 15 minutes on day one.)
I have run into blatant misogyny a couple times while leading an effects team, which I recognized only because the director would make it a point to single out and blame female crew members for anything that went wrong regardless if it was actually a man’s fault or even their department. I always stand up to that sort of thing.

But as a director, I outright tell people to aim their rotten tomatoes at me because everyone on the crew, regardless of their sex, worked under my direction.

I do feel that in some circles I am judged more harshly as a director, and my early blunders were not as easily forgiven (if ever) as similar ones made by my male counterparts. But in a way, I think that’s helped me more than anything because it really pushed me to up my game. I tend to look at every success I have, be it winning an award or getting a positive review, as a big middle finger to the people who gave me a hard time.

Be prepared to wear your skin like armor. There are some jackasses out there who will try very hard to tear you down and make you feel like you are hopelessly adequate early on in your career, although they may seem to be very supportive at first.