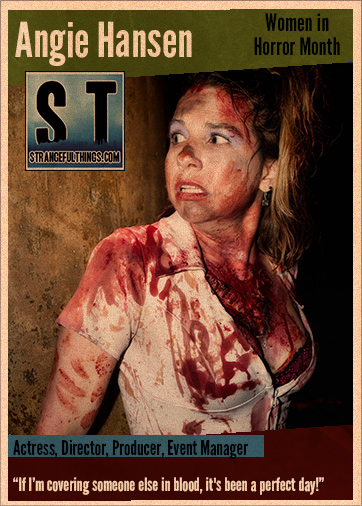 I have a deep roots in horror fostered by my mom. We always watched “spook movies” together for as long as I can remember. Ever since then, I have loved ghost stories and over time it has developed into my career. I love theatre and film and I find that horror is the amalgamation of both. When October rolls around and I get to scare people and get the immediate reaction rather than waiting for them to watch a film, it’s the absolute best! If I’m covered in blood or covering someone else in blood, it’s been a perfect day!

It’s creative. I love monster designs and creative character concepts. I’m also extremely easily scared, so it’s very much a thrill for me even after years in the industry.

I am currently playing Pandora in Forte Films Entertainment’s series “The Sin Reapers”, acting in feature film “Facelift”, and assistant directing B&W feature film “A Hawk and a Handsaw” (Eugene Cullivan). “The River” (Caleb Allen & Meghann Wright) music video, “The Devil’s Cut” (Phil Kral) short film and “An Act of Concession” (MassGrave Pictures) film race that I had an acting roles in have recently won awards in the festival circuit. I just started entering short films I directed, “The Pumpkin Queen”, (4K) “Candy Crunch” (Super8), and “Trance” (16mm) into festivals. I am in post-production of short, “Rat-a-Tat” (16mm) in which I acted and produced.

I get treated with respect because I work hard and I love what I do. I think people quickly realize who works the hardest and we get rewarded from it. I love working with everyone in this industry and have met some killer women in horror because of it.

Be yourself. Work hard. Harder than any man. Do everything. Make yourself indispensable. Always remember your worth. A day off is a day that you can spend doing something to get closer to your goals.