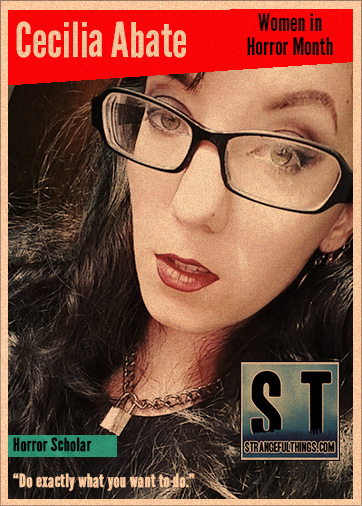 I’m an analyst who’s been crazy about spooky stuff since I was little. I got a degree in journalism & gender studies a few years ago and have been dying to connect those three passions ever since.

It’s creative. I love monster designs and creative character concepts. I’m also extremely easily scared, so it’s very much a thrill for me even after years in the industry.

I’ve had the horror scholar concept rolling for a few years, and I’ve put out 3 finished written pieces and I have one ongoing analysis project. I’ve just recently started my official FB page for it and will be starting a Twitter for it shortly. Basically, Horror Scholar is an effort to both bring some of my thought pieces on feminism in the genre to light and also engage the horror community in the critical analysis it needs for the genre to grow. I’m working on research for a piece on mental illness in horror and am always adding to my rolling statistical analysis of sexual assault in American Horror Story.

I get belittled a lot for my work — when people see I’m young and female, they assume I’m not up to par. When they hear I’m a feminist, well, then that must mean I’m totally off the handle. In that way, it’s annoying wading through the doubt and disrespect all the time, but I wouldn’t trade it for the world, because it gives me a very special perspective & opportunity to bond with other women.

The fan demand to see women naked and in pain will be frightening sometimes, and it may make you feel like you don’t have a place or that you shouldn’t appear too smart. Don’t listen to this. Do exactly what you want to do.