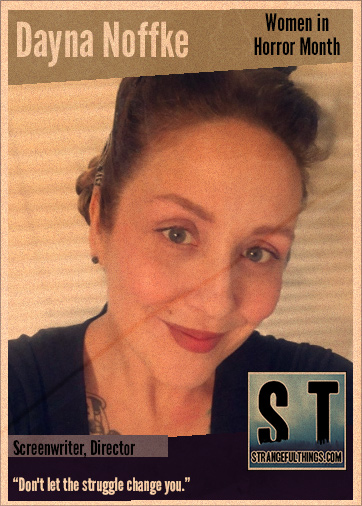 I create art that speaks to the human experience and relationships and to the duality of life – the horrible, beautiful absurdity of it all.

I’m re-creating the Addams Family living room in my house and the only animal I’ve ever dissected was a human. (I promise you it was an accredited college course…. OR WAS IT?)

I like to see people survive. I love special effects. I love that it’s a subversive genre that isn’t afraid to touch on issues that other types of film tiptoe around.

I love hanging out with my horror weirdo friends. Making movies is always magic, but it’s hard to beat being covered in fake blood on set!

I’ve been making films since 2009. I started out with backyard gonzo-style fare. In fact, Andrew Shearer of Gonzoriffic Films shot my first movie! I’ve done everything from RollerZombies (B-movie fun) to my latest short, Teaser – a lush little slice of burlesque-inspired horror.

I’m currently working on getting Teaser out onto the festival circuit and I’m in development on a feature film, Eidolon, that is a modern re-imagining of a classic Victorian horror story.

I’m also slated to shoot a short film titled Shark this April in association with Atlanta Media Pros. I can’t say much about this one yet except that you are in for a real surprise.

Meanwhile, I’m also kicking around a few other short film ideas with friends and working on a new feature script.

n the end, I just am who I am and I would like to reach a point where my work can speak for itself.

I like to think that we are turning a corner, that we are about to see some real change where things become more equitable for the women behind the camera. But the truth of the matter is that it is still more difficult for us to secure funding in the indie world and access to the larger studio jobs.

It’s a very complex history that has brought us to this current situation and the solution has to come from many sides. Guys, we are counting on you to get on board to help change things. What it all comes down to, in my mind, is this quote from Kathryn Bigelow:

“If there’s specific resistance to women making movies, I just choose to ignore that as an obstacle for two reasons: I can’t change my gender, and I refuse to stop making movies.”

There is nothing wrong with making all the movies in the world just because it brings you joy – but if you are in it for a career, to become a working filmmaker, you are in for a long tough road. You have to believe in yourself and be your own cheerleader because there will be many moments when you want to give up.