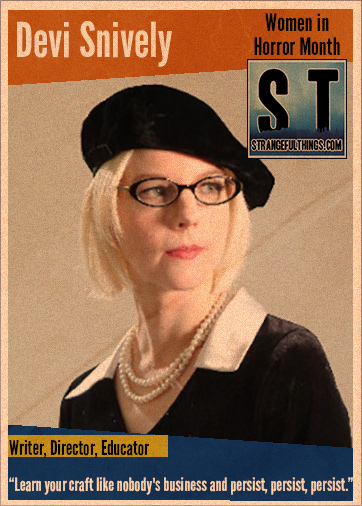 A former ballerina, published fiction author and sometimes film instructor at the University of Notre Dame, I’m a proud alumnus of the American Film Institute’s Directing Workshop for Women and unapologetic beret enthusiast. When I’m not writing and making films, I chase monkeys around the world with my anthropologist partner. My favorite cocktail, at present, is a Gin Fizz.

When horror’s well-executed, it’s genius — chock full of socio-cultural subtext, visceral thrills and the best and worst of human natures. Watching it in a communal situation only adds to the joy. And even when horror totally sucks, more times than not it still delivers a damn good time. It’s a genre that stands in a class by itself.

To date, my oeuvre consists of primarily short, darkly comedic films inspired by classic monster pics and E.C horror comics with nods to the early works of Tim Burton, John Landis and Shirley Temple. My latest film, currently making rounds on the fest circuit, is BRIDE OF FRANKIE, a proof-of-concept short prequel to what I hope will be my first feature with an actual budget, inspired by the oft-ignored feminist themes in Mary Shelley’s FRANKENSTEIN. It’s set in 1937 and features Amelia Earhart as a supporting character. It’s a romantic, horror, sci-fi dramedy with action sequences and the occasional song and dance number. Details can be found at brideoffrankie.com.

I’ve scored a lot of free drinks at film festivals and found a fabulous sisterhood amongst my women in horror filmmaking peers. I’ve also banged my head repeatedly against the glass ceiling, though I only recently recognized it because they clean it so well with Windex, sometimes it’s hard to see.

On women filmmaker panels I used to make a point of saying how I didn’t see myself as a female filmmaker so much as a filmmaker who happens to be female. It was a naive and, frankly, deluded perspective. The powers-that-be won’t see you that way. So just know going in that as a female you’re gonna be held to a higher standard and rise to the challenge. Learn your craft like nobody’s business and persist, persist, persist. Meanwhile, do all you can to support your female filmmaking peers and strive to be part of the solution. We’re all in this together.