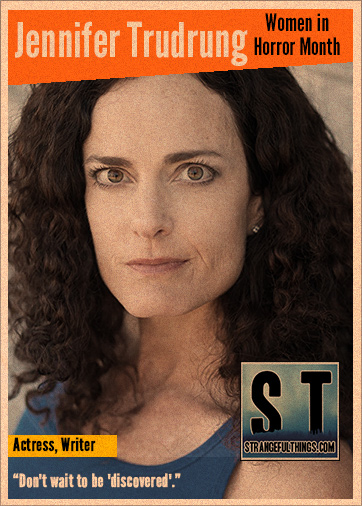 I am an actress and writer. My main claim to fame as an actress is working on The Vampire Diaries in the episode “Hell is Other People” and on Goosebumps as a ghoul. I have also worked as a zombie in The Walking Dead on seasons 3 to 7. I started writing short horror films a few years ago and fell in love with writing scripts and the creation process. I love writing about every day quiet moments and relationships and turning them into the macabre and horrific. I especially focus on the fear of being a parent and all the possibilities of terror of having children and the love and potential loss within that world.

I fell in love with horror when I was a teenager reading Stephen King, Clive Barker, Shirley Jackson, Peter Straub, and Dean Koontz. It became an escape for me from the awkwardness and often loneliness of being an adolescent. And my Dad helped instigate my love of horror also from his love of scaring and pulling pranks on my sister and I. 🙂

I have written and produced 8 short horror films and just wrapped my latest short horror film called “Revisit.” This past project is my darkest to date and I’m really excited to see how it turns out. My short film “Unbearing” is circulating the film festivals and doing well most recently being shown at the Final Girls Berlin Festival, Sick Chicks Flicks Film Festival, and the Women in Horror Film Festival. I am in the editing process on my first feature length horror screenplay and I’m super motivated to finish this script and start pitching it and seeing if it can be picked out and produced. I will also be shooting another short horror film in mid March that I wrote called “Hoard.” I’m acting in two short films (one of which is a horror film) and one feature film in the next three months. My creative juices are flowing and I’m really excited to keep working!

I feel that being a woman in the writing part of the industry has really helped me. I think that there is a push to explore and celebrate females in the industry and it is about time for that! But also to celebrate females specifically in the horror industry. I think that women bring such a unique and smart focus to all genres and especially horror. I think also that females are very supportive of each other and are also really good communicators and networkers which is very helpful.

Celebrate your uniqueness and don’t be afraid to push boundaries. And put yourself out there. Promote and network and don’t wait to be “discovered.”