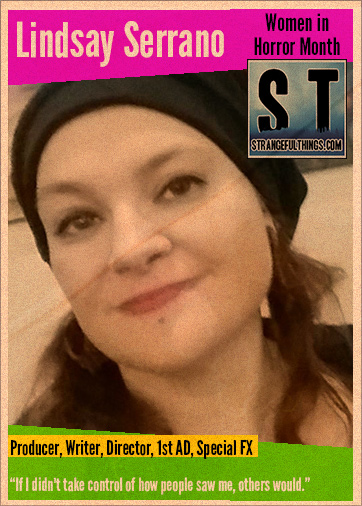 I’m the co-owner of Mass Grave Pictures with my husband Manny Serrano. Together we’ve produced two feature films, a featurette, and over 20 short films. I produced both films as well as acting as 1st AD and head of special FX. And I co-wrote and co-directed the featurette. Last year I wrote and directed my first short film. I’ve also been the Assistant Director for the Zombie Hunters City of the Dead TV series and two web series, Holidays of Terror and The Spies Files. Oh and I’m also the co-host of the Filmmaking Sucks Podcast, a podcast for first time filmmakers telling them about all the mistakes we’ve made and how to avoid them.

To me horror is a little bit of everything, drama, comedy, and even romance. Why focus on one type of storytelling when you can embrace them all?! Horror also removes the limits of reality, of everyday life. Anything can happen and I just love the possibilities.

Our first feature is an 80s slasher film called Blood Slaughter Massacre. We made it as a period piece with authentic 80s clothing and props and we even created our makeup effects with only materials that were available in the 80s. Our second feature is a cosmic thriller called Theta States that deals with binaural waves and insomnia. Our featurette, The Attack of the Brain People, is a love letter to creature features from the 1950s. It’s a black and white short film I would describe as Ed Wood directing Night of the Living Dead with brains on strings instead of zombies. And my short film, Beneath, tells the story of a young woman seeking revenge on her boyfriend after he posts a naughty video online without her permission.

I wouldn’t say it helped me or hurt me but I’ve definitely experienced some bias on set and at networking events. When I first started out people just assumed I was an actress and not matter how many times I told them I worked behind the camera exclusively, it just wouldn’t stick or they would tell me that I was pretty enough to be act… Ugh. One guy would repeatedly tag me in casting notices until I finally reported him. That taught me to be very protective of my persona and reputation because if I didn’t take control of how people saw me, others would. I also had to learn to be aware of who I work with. There’s been a couple of times on set where someone asks me a question and then goes and double checks my answer with a male crew member, even when I was the producer on the film and the crew member has nothing to do with the question they are asking! I had to fight to get respect a lot in the beginning.

You need tough skin in this industry and you can’t internalize what others say about you or your work. Just keeping doing you and take the journey how you want to take it. Have faith in yourself and listen to your gut, it won’t lead you astray.