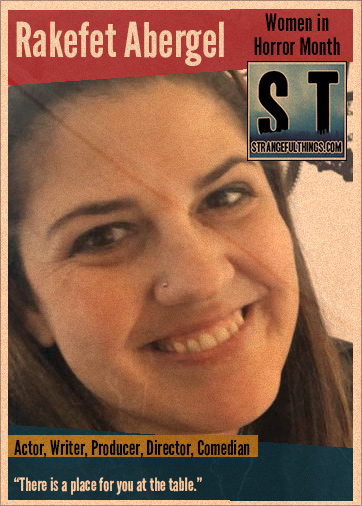 I’m a bit of a jack of all trades with a history in comedy. A Los Angeles native, I grew up around people in the entertainment industry and never wavered from my commitment to be a part of that world. Acting has always been my passion, but I have crossed over into the production side and I love it too.

I actually never really dug horror. Not because it’s not an incredible genre, but because horror always had a way to scare the hell out of me and I’m not a huge fan of being scared. No roller coasters, dangerous sports, or scary movies. 🙂 That being said, having made what I call an “unintentional horror film”, I have been exposed to so many new horror films and filmmakers and have found that I surprisingly have a place in my heart for the genre. The people I’ve met on the horror film festival circuit have been some of the best people I have ever met. I even found myself enjoying being a little scared while watching the films. I now kind of understand the allure of the genre. My boyfriend is a huge horror fan too and his excitement for horror films has definitely been contagious. I now appreciate a whole different world of cinema and for that I am grateful.

I wrote, produced, and starred in a short film called Jax in Love. My “unintentional horror film”. Even after it was finished I wasn’t sure it would be considered horror. I sent it to a couple horror enthusiasts who confirmed that it is indeed a horror film! Maybe more of a psychological thriller, than horror, but in the genre nonetheless. It has gotten into more than a dozen festivals and garnered awards like Best Actress in a Short at Nightmares Film Festival (one of the best fests out there), Best Actress at Oregon Scream Week, and recently won Best Horror Short at Hollywood Reel Independent Film Festival solidifying for me that it is in fact a horror film. And I’m so proud of it’s success!

I’m currently working on two new scripts. One is a ghost story and one is more of a dramatic, artsy film that could definitely fit in with the horror genre even though it may not be explicitly horror. Somehow I’m now addicted to making horror films!

I don’t think being a woman in the industry has actually HURT me, but not sure it has helped either. It’s definitely an uphill battle in a male dominated industry, but unfortunately that can be said for most industries. I love how women are finally being uplifted and seen and appreciated via things like Women in Horror month, the #TimesUp and #MeToo movements, and all the work that Women in Film does as well. The first festival that Jax in Love got into was the first ever Women in Horror Film Festival in Peachtree City, GA and boy did it set the bar high! What a treat to be surrounded by so many female filmmakers and creators and to watch so many films with strong female protagonists.

I wanted the character of Jax to be a lot like me, in the sense that she is a real person with real emotions and doesn’t look like the typical Hollywood leading lady. I wanted to cast myself in a role that I would never get cast in because of the very narrow physical definition Hollywood has for leading actresses. I hope that we see more “real looking” people in leading roles and can appreciate that even women considered to be “character actors” can also carry a film and even be a romantic interest! Gasp!
I have experienced sexual harassment on sets, including my own, and that has to stop. We need to be more aware of what is acceptable and what is not and create boundaries for appropriate behavior in the workplace.

Make your art. Do your film. Don’t let anyone tell you that you can’t or that it’s not for you because of x,y or z. While horror may still be a male dominated genre with a history of female exploitation, that definition is changing and those conversations are being had. Finally. I’ve met tons of filmmakers, male and female, who are committed to seeing the genre grow in all directions. And that’s very exciting. There is a place for you at the table. Don’t let anyone tell you any different.