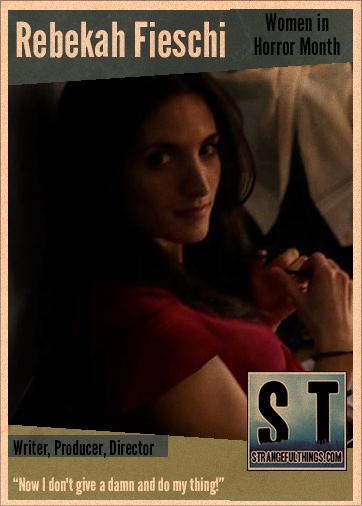 I’m a horror and fantasy filmmaker making films through my company Horromance Productions.
My new film, Sylphvania Grove, successfully crowdfunded on Seed&Spark last April and is now in the final stage post-production, planning a festival release this summer.
My previous short, Mauvaises Têtes, is an award-winning reinvention of classic Hollywood horror films such as Frankenstein, it’s screened in film festivals around the world, it is now distributed through Seed&Spark and will be released on Vimeo on Demand February 14th. My focus is to bring more entertaining, yet layered, character driven gothic horror and fantasy films to the screen.  I’m also an advocate of fair gender representation in cinema, I do not want to be a female filmmaker, I just want to be a filmmaker but I have been thrust into a world in which women are not fairly represented so I’m proud to give nuanced voices to female characters and to be part of the group seeking to transform the industry.

Horror is one of the best genre to express suppressed and tamed emotions that live in our unconscious minds while remaining entertaining. It’s a broad genre that effects you viscerally.
One of my absolute favorite thing about horror is it’s use of creatures and monsters to explore characters.

Sylphvania Grove tells the adventure of a young girl, Mycena, who doesn’t fit in at school and is neglected by her parents. Her only refuge is the fantasy stories she reads secretly at night under her blankets. One night, a magical being pops out of her book and beckons her to follow it into the woods where her fears take on fantastic forms. It’s a fantasy film in the spirit of films such as The Neverending Story and E.T. the Extraterrestrial. Coming soon to festivals everywhere!

Mauvaises Têtes is a a multiple award-winning horror comedy in the spirit of classic MGM and Universal monster movies from the 1920s/30s. It tells the story of an odd woman, Jenny, who loses her mind in the search for love and finds the perfect man in her own peculiar way. It will be available to rent on Vimeo On Demand February 14th and is now streaming at Seed&Spark.

It’s harder to be taken seriously or considered as a filmmaker when attending film festivals. It’s also more challenging to get work offers. It took me a while to be able to reconcile being myself with being a filmmaker, as people have tried to discourage me to make genre films, or would not take me seriously because of the way I dress. I’ve felt a lot of pressure of having to fit in a certain mold of what was expected of me, now I don’t give a damn and do my thing!

If that’s what you want to do, do it and do it your way. Be yourself and tell your stories.