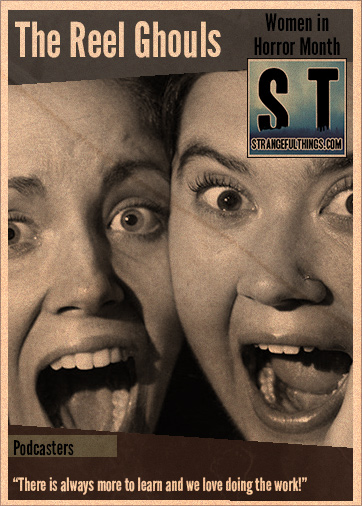 Amy and I met in college and found that we shared a mutual love of horror movies and not a lot of others around us did. So, after graduation, we decided to get together and record our discussions about horror movies we love, and some we don’t! We are trying to broaden our own knowledge of the horror genre and the way in which people experience horror! There is often more to the genre then just blood, gore, and monsters (although that’s not too bad)! We love to explore origins, psychology, back story, and (my favorite), behind the scenes facts! There is always more to learn and we love doing the work!

Horror, for us, can be so fun to watch and quite a thrill. It takes you out of reality for a bit and makes you feel so many emotions in such a short amount of time. The adrenaline rush on its own can make the genre worth it. But mostly, a horror feature can often have so much more to it than just the scares, and that is what makes it truly fascinating. Getting a glimpse into someone’s mind and what makes them hide under the covers is always interesting!

We started Reel Ghouls in September of 2017 and currently have 15 episodes up on SoundCloud and Apple podcasts. It is so amazing to have a conversation with someone and teach each other things and know that others are listening and enjoying! The best is when someone sends us a message to tell us more than what we said, or even add on! It is an open platform and is the most fun!

I think it has been more of a push for us! The horror genre is really run by men. There are a few notable women, but in terms of the “underdogs” there isn’t much that we have heard about. We try to have an inviting and easygoing energy while throwing in the gritty, rough and tumble that the genre possesses. Which is what has brought those into our list of listeners who aren’t particularly fans of the genre. We hope to also include some guests in the future that have had in influence in the industry, or even just fans, so bringing in women would be so great!

Don’t ever feel like you have to play the damsel, or the slut, or the token “final girl.” You can be a badass, chainsaw wielding, franchise-worthy psycho killer! And don’t be afraid to create your own projects!