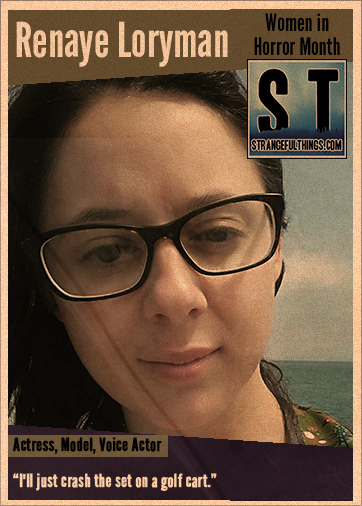 I was born in Sydney, Australia but grew up in the regional town of Maitland. It’s famous for an annual train festival and magpies that will steal your children. The job that pays regularly is in I.T. I am a systems tester. It’s one of the few jobs where I am encouraged to break stuff.

School was a putrid, depressing nightmare of inhibition and control, until I discovered acting. In primary school, I used to put on little skits, comedy and magic shows as part of our after school program. It was better than doing homework. One of the co-ordinators recommended that I go to the Catholic High School as they offered a great drama program. We were poor and not Catholic so it wasn’t an option. I went to the public high school.

In high school I would frequently skip classes. One day I skipped maths class and was hanging out with the drama students. They asked me to read from a script. A substitute teacher was in that day, so she had no idea I wasn’t meant to be in that class. I performed the script, she gave me direction and from there a spark grew into a flame that has never gone out.

I completed high school somehow and tried to go to University but hated that too. Instead, I joined Maitland Repertory Theatre, it’s one of the few Repertory theatres left and has been running in Maitland since 1947. This place became my home. The people became my family. They are lifelong friends.

I got to perform in Oscar Wilde plays, Shakespeare, French avant-garde, slapstick comedy, musicals (not that I can sing, but never let that stop ya!).

Later, I moved to Sydney and stupidly let fear tell me that I wasn’t an actor. There was no good reason for that. It was purely internal. Until I was Facebook stalked (in a nice way) by a mutual friend who saw me in “Macbeth” and “The Maids” by Jean Genet. We met for coffee and he cast me in his production of “The Merchant Of Venice” as Jessica.

That’s where Edward Lyons and Melissa Lyons came along. The power couple behind “Alfred J Hemlock”. Ed and I were mates from a day job that we both hated. Talking about acting and filmmaking was our escape. I invited Ed and Mel along to the play and from there, they cast me as the protagonist in “Alfred J Hemlock”

“Alfred J Hemlock” is the first proper short film I have ever done. So I was shitting myself. Here were professional actors, cinematographers, light bulb guys, production designers and I was a mug amateur. There is was again. That stupid, lying turd called fear. The AJH team were amazing! I had never before worked with actors where I felt such chemistry. None of us could have delivered the performances we did without the other. It was magic.

That’s what I have always been fascinated with film. The magic in story telling. My favourite filmmaker is Georges Méliès. He had this new medium with which he could share magic, where he could take us beyond our world on earth. He took us to the moon. He was creating beauty while the earth was going to Hell. His work truly moves me.

Another thing I love about film is the artistry in each shot. Having a director with vision and a cinematographer that is on the same wavelength brings the universe in the script alive. This has sparked within me a passion for photography. To capture these remarkable moments and preserve them for all of you. (Check my insta )

When I was a kid, I found horror amusing. My friend and I were somehow allowed to watch “The Exorcist” when we were about 12. Definitely not age appropriate. We loved it though. Mostly for the rude swears and the pea soup, projectile vomit.

As I got older, I started to dig horror because when the fear is real, the elation of victory is as equally intense. A great horror sucks you into the depths of the dark world. You’re there with the protagonist, you feel what they feel, you jump when they jump, you scream when they scream.

Even with the more schlocky flicks, it’s oddly satisfying to watch the thud of a head rolling off a body, the hacking off of limbs and bursts of blood. Such fun!

My favourite type of horror would be the psychological thrillers because the audience creates the monster in their head from their own dark fears.

At the moment our short film “Alfred J Hemlock” is going great guns on the festival circuit. I play the protagonist “Emily”. She was a remarkable character to play. Her vulnerability and strength is something I was able to connect with. There have been times when I have been just like her, often it felt like re-living a memory. I am so grateful to the team on set who were incredibly supportive and encouraging. They created a safe place to be vulnerable.

“Alfred J Hemlock” has opened a wonderful door into the horror community of filmmakers and actors. At the Women In Horror Film Festival in Atlanta, I got to meet actresses who I have idolised, producers and filmmakers whose work have contributed greatly to the film industry. There was a surreal moment at the VIP party on opening night, when I met Heather Langenkamp. She said she really liked my work. I told her I really like her work too, while trying to remain composed and not come across as a gushing fan. To think, the girl who grew up in housing commission and who used to skip school was at a VIP party meeting horror movie royalty.

The Women In Horror Film festival introduced me to the most amazing filmmakers who I now call my friends. Horror people are a remarkable bunch of creative souls. It honestly felt like a horror movie marathon with my buddies. Best of all, I got to go airporting again with my very best buddies; Mel and Ed. I’ll briefly explain the background of ‘airporting’. The first time I had ever left the country was to go to the Dances With Films Festival in Los Angeles in June. I did a little video to let everyone know, and explained that I had no idea how to ‘airport’. Thankfully, Mel and Ed were there to guide me.

So the burning question is “What’s next?” For filmmaking, I hope to be involved in more horror in the future. I’m not too sure what I can say about it or whether I’ll be acting in it. Even if I’m not, I’ll just crash the set on a golf cart and challenge the director to a duel with an umbrella.

Meanwhile, I am writing a story that is near to my heart. It is the personal story of Australia’s shameful history. My grandmothers story. She passed away 2 years ago and I regret not writing it while she was alive. My grandmother was a Ngarabal woman from Northern New South Wales, just like her mother before her. Her father was an Irish man, a drover. She and her 10 brothers and sisters were taken in the middle of the night and were raised in a Catholic Orphanage. In Australia, they make up a large group of indigenous people who were the stolen generation. It was something she and I spoke about at great lengths. I knew about the stolen generation before it was given that name. It’s a story that needs to be told. I hope to develop it into a script. The first draft is underway.

Interesting question, which is no surprise because you are an interesting person Acadia Einstein.

If it has helped or hurt me, I have paid no attention to either because it would have been destructive. I have a job to do, so I go in and do the job. Thankfully, I have worked with people who have been professional and respectful and I am at a point now where I know not to take shit from anybody. 10 years ago, I don’t think I would have been as gutsy.

I spoke about fear earlier, that’s been the biggest hindrance to my career. My own fear that I am not talented enough, smart enough, heck even pretty enough to be an actress. Here’s what I know about fear that I didn’t know 10 years ago. Even 4 years ago when I was doing “The Merchant of Venice”. Fear is an effing liar! It’s an insatiable beast that feeds on your insecurity. Stop feeding it. When I let that fear go, opportunity took it’s place. There was a great feeling of freedom that came with that opportunity.

And so bloody what if there is someone who is smarter, prettier or more talented. I was hired for a reason. To do the job.

Horror fans are super enthusiastic. They are hungry for content and if you make something good, they will worship you.

After working in a day job, you’re probably going to have to go straight to set to work nights. In the middle of winter. In a flimsy dress and an autumn coat which is not nearly warm enough. There’s mud and rain and tears. There is a morose feeling that may hang around for a few days after shooting because you have delivered such a raw part of your soul. But you will get through and when you’re watching your film through tears of joy at the Chinese Theater in Hollywood it will be all worthwhile.